The diagonal box stitch is one of many stitches that can be worked from “corner to corner” (c2c), and it’s everywhere right now. This wildly popular stitch is great for blankets, but can also be used for scarves, sweaters, or just about anything else! Because it’s worked diagonally across the fabric, it creates nice diagonal stripes when used with self striping yarns. It’s also made up of small boxes that can act as “pixels”, so works well for graphed images too.

It can be a little intimidating the first time, but it’s made up of easy stitches – nothing more than chains and double crochet. Here’s how you do it:

Ch 6, turn, dc in the 4th ch from the hook, and in the next 2 chains. This makes your first box – it is made up of a chain 3 space and 3 dc stitches.This box will create one corner of your work. 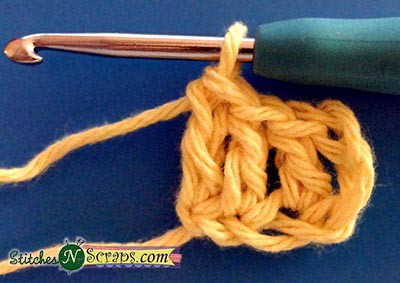 We want our finished piece to be bigger in both directions (length and width) than just 1 box, so we need to increase the number of boxes on each row. When we want to increase, we need to create a brand new box at the edge of the row. To do that, do exactly the same thing as the first box: Ch 6, turn, dc in the 4th ch from the hook, and in the next 2 chains. 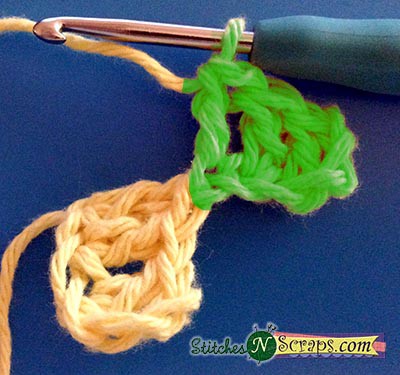 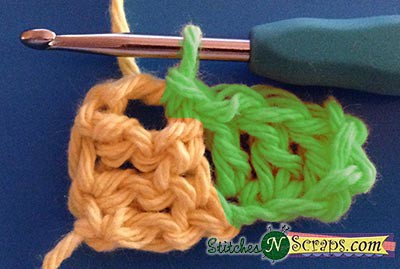 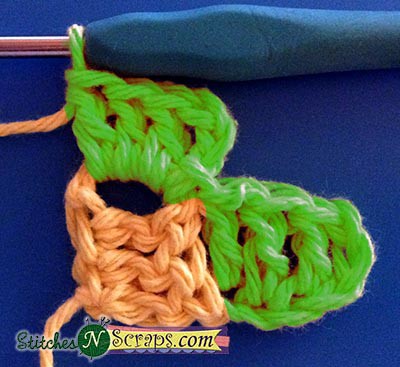 As you can see, the first row has 1 box, the 2nd row has 2 boxes. Let’s increase again, to make 3 boxes on the next row. Once more, make a new box in the same way as before: Ch 6, turn, dc in 4th ch from hook and in next 2 chs. Then slip stitch into the ch-3 space on the adjacent box. 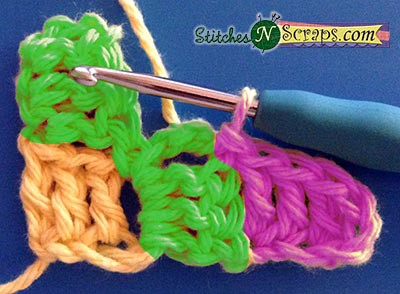 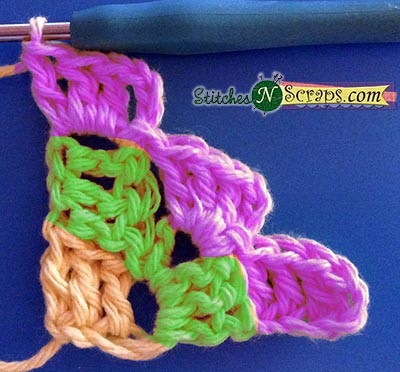 If we wanted a 3 x 3 square, we would stop increasing now and start decreasing…but instead, let’s make a 5 x 3 rectangle. To do this, we need to extend the work for 2 more rows on one edge, without extending it on the other edge. In doing this, the number of boxes in each row will stay the same (3).

Section 2 – Neither increasing nor decreasing:

(only needed if making a rectangle)

Instead of starting the new row by creating a new box, we start the row by working into the first existing box: Ch 3, turn, sl st in  the ch 3 sp of the first box. 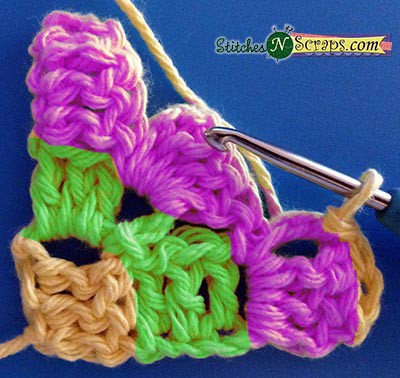 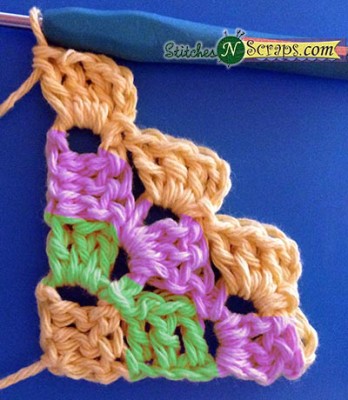 Notice how one side of the work now has 3 boxes and the other side has 4? We want that longer side to have 5, and that’s where our hook is, so start this row by adding a box: Ch 6, turn, dc, in 4th ch from hook and in next 2 chs, sl st in the ch sp on the adjacent box.

Now (ch 3, 3 dc) into that space, and sl st into the ch sp on the next box.  Repeat again for the next box. Now there’s one more box, but we don’t want to work into it because that would add length on the short side. So instead, we end the row with that last sl st. 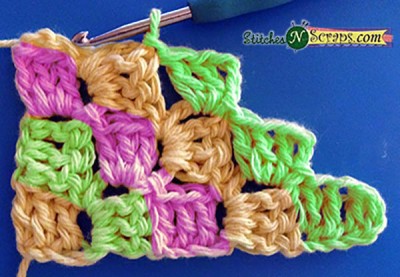 Row 5 now still has 3 boxes on it, even though we did add one at the beginning, because we left the last one unworked. You can see that your work has 5 boxes along one straight edge, and 3 boxes along the other. This is what we wanted, so now let’s decrease to finish off the rectangle.

For this section we basically never want to add any boxes, and we want to leave the last box of each row unworked. Start with a ch 3, turn, and sl st into the ch 3 sp from the first box. 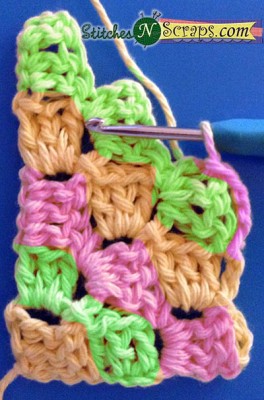 (Ch 3, 3 dc in same sp, sl st in ch sp from next box) twice. This brings us to the last box, which we are going to leave unworked. Now Row 6 has only 2 boxes in it, and the lengths of the edges have not increased. 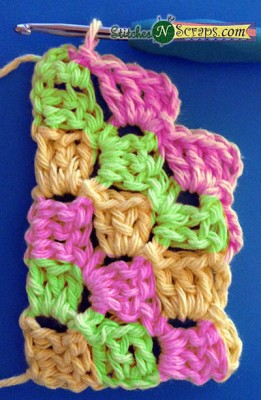 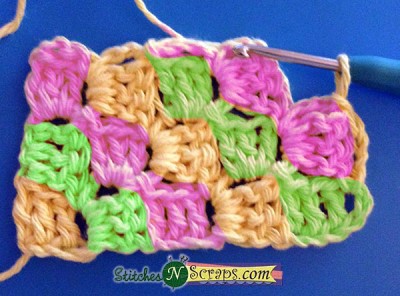 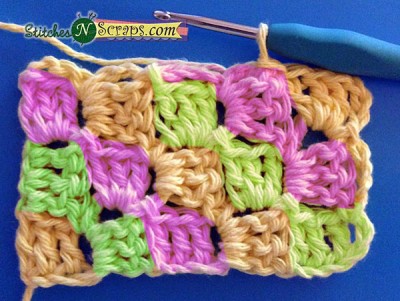 To finish off nicely and make our yarn end in the corner, ch 3, turn, and sl st into the ch 3 sp on the box you just worked. 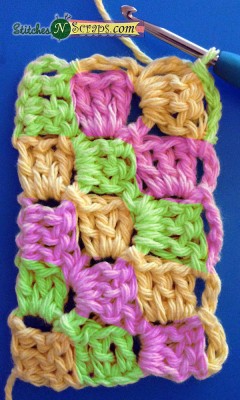 That’s it! We now have a nice rectangle, 3 boxes wide by 5 boxes long. You may notice that on 2 sides of your piece you have ch 3 loops running along the edge, whereas on the other 2 sides, you do not. Most edgings for diagonal box stitch patterns start by working a ch 3 and a slip stitch over each box to create those missing loops on the 2 sides. 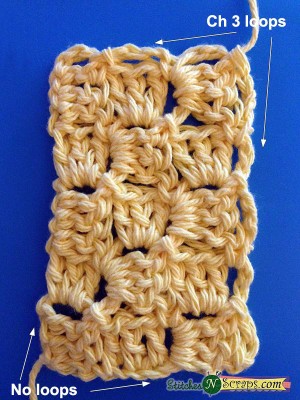 With this stitch, you can easily create squares and rectangles of all sizes, from coasters to blankets. Once you get the hang of it, this stitch pattern can go very quickly, as you’re always working into chain spaces rather than into individual stitches. Using a self striping yarn or changing colors as you go will create fun diagonal stripes. You can also work individual boxes in different colors to create designs from charts. I hope you’ll give it a try, and if you have any questions don’t hesitate to ask in the comments below!

If you liked this stitch, also be sure to try this puff stitch variation of it! 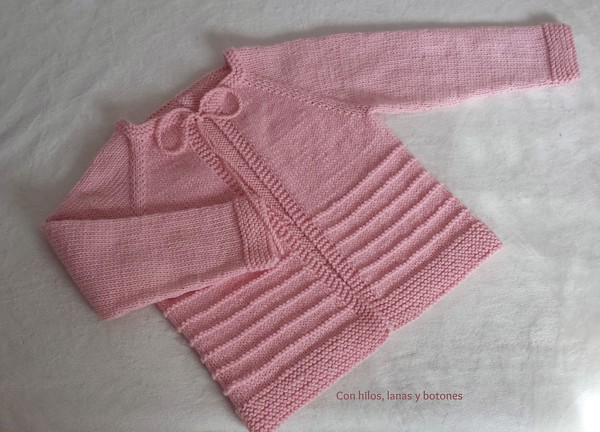 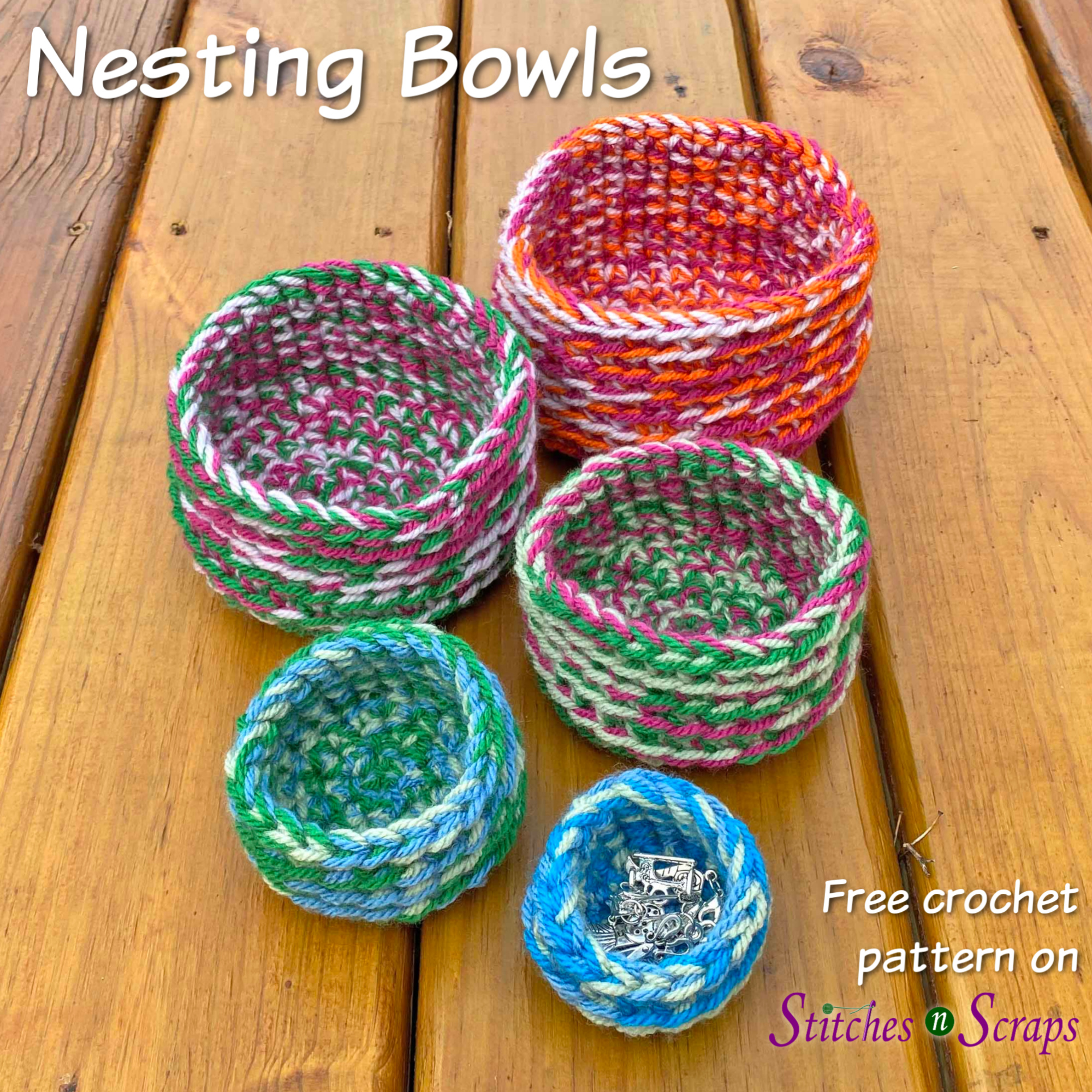 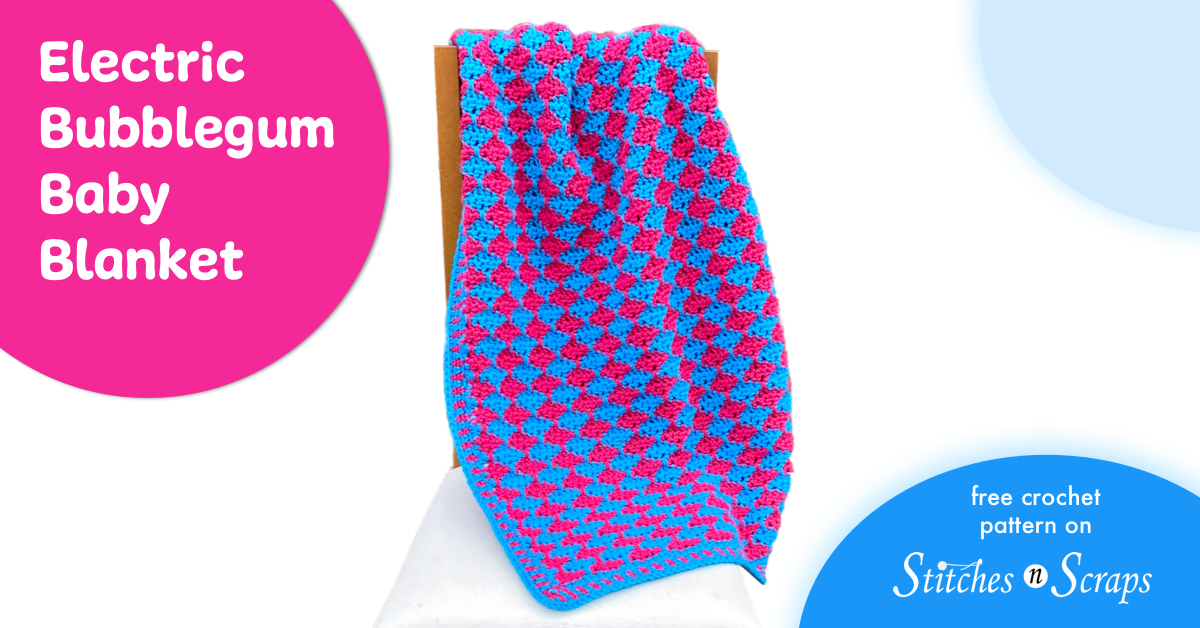 How to Crochet a Baby Blanket – Electric Bubblegum